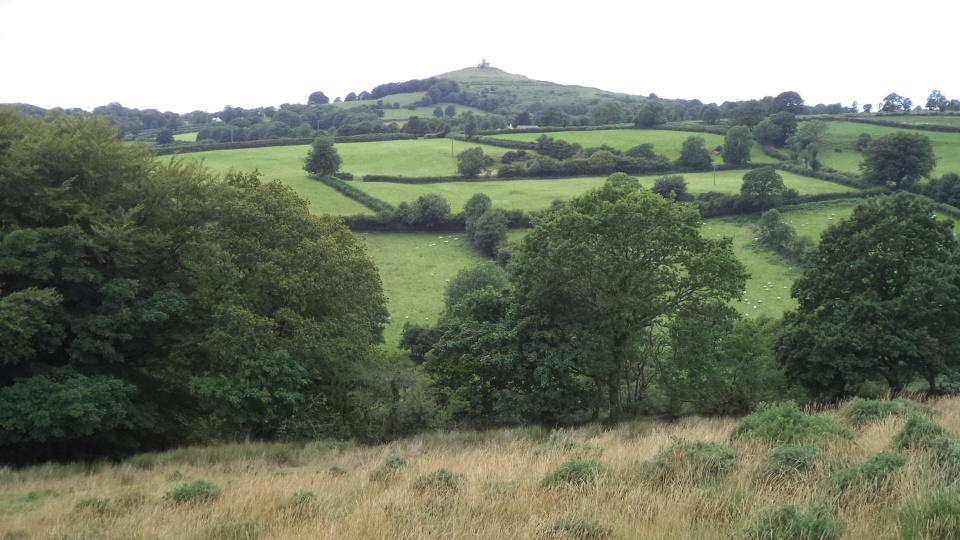 This is the valley of the River Burn between North Brentor and Mary Tavy in west Devon. The Campaign to Protect Rural England wants to build a main line railway through it.

My blog The wrong kind of evidence on the line challenged the CPRE’s claim that its recent report made a case for reopening the dismantled railway line between the Devon towns of Okehampton and Tavistock. The trackbed runs along the north and west edges of Dartmoor. The scheme would form part of a larger project, supported by the Plymouth business lobby, for a second main line between Plymouth and Exeter. Further background in my other blog – please read it.

This new blog attempts to show pictorially the changes and damage that rebuilding the dismantled line would cause. It’s worth remembering that the line would need to be rebuilt to modern engineering and safety standards: it wouldn’t be a case of just chopping away some trees and bushes and then laying the track.

Impact on cyclists and walkers

The stretch of trackbed between Okehampton and Lydford forms part of national cycle route 27, as well as a generally flat path for walkers.

Trackbed as cycleway at Sourton Down 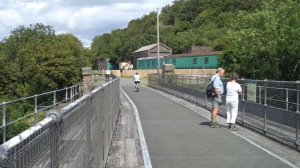 Though some parts of the path have trees and bushes on either side (which form a useful windbreak), there are stunning views too.

The Tavistock viaduct is a very attractive footpath with fine views of the town. It seems unlikely there would be room for pedestrians and cyclists if the railway were put back in place.

Rail safety regulations would specify a minimum distance, as well as barriers, between the railway line and a cycle path or footpath, so not only would peace and quiet go out of the window but also the landtake would be significant.

Impact on homes and farms

Most, perhaps all, of the old trackbed south of Lydford is in private ownership. Some is now in farm use, and elsewhere stations buildlings have been converted into private homes with the trackbed itself forming part of the garden. 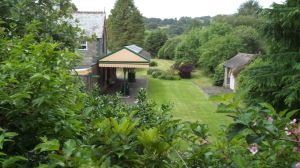 Brentor station is now a private house and garden

At Tavistock, offices and private houses surround the old North station and block the viaduct. 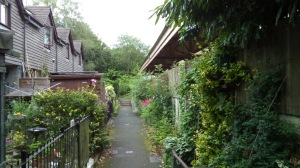 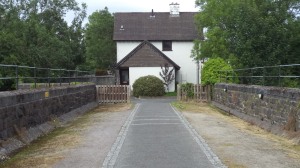 Meldon Viaduct is a structure of historic interest. Whether it could be strengthened to take trains again seems doubtful since Network Rail have in the past said a new structure would be needed if the line were to reopen. 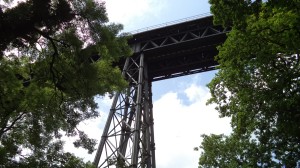 Elsewhere, stone overbridges have disappeared and would have to be replaced. Network Rail bridge architecture is not renowned for its sensitivity to the natural environment. 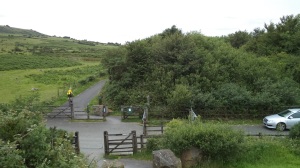 Missing bridge over a road at Prewley Moor

I’m no wildlife expert but it’s reasonable to assume that those parts of the trackbed now covered in vegetation are home to all manner of beesties.

Impact on landscape and tranquillity

Although the rumble of the A30 traffic is audible around Meldon, the area around Brentor and Mary Tavy is silent save for the occasional bleating of sheep. It is unspoilt and nature has reabsorbed the dismantled railway back into the landscape.

As a lobbying group, the CPRE ought to take seriously the government’s stated policy that the natural environment can be valued as part of any investment appraisal process. Sadly, there’s no evidence that this figures in CPRE’s current thinking about reopening rural railways.

The Campaign to Protect Rural England – CPRE – used to pride itself on evidence-based (or at least evidence-backed) lobbying. The publication last month of a report on the rebuilding and reopening of the old railway route across Devon between Okehampton and Tavistock [1] raises questions as to whether spin has now got the upper hand at CPRE HQ.

For those unfamiliar with Devon and its railways, the key facts are these. Before the Beeching closures in the 1960s there were two main line routes between Exeter and Plymouth: one south of Dartmoor via Dawlish and Totnes, and one to the north of Dartmoor via Okehampton and Tavistock. Following Beeching the latter line was closed to passenger traffic and the track between Meldon Quarry (just west of Okehampton) and Bere Alston (south of Tavistock) removed. Within this 15-mile “gap”, much of the trackbed is now part of the national cycling network and the rest in private hands. Following the two-month long closure of the remaining main line when the sea wall at Dawlish was breached in the winter of 2014, there has been considerable debate about the value of reopening the line via Okehampton.

Now back to CPRE.

In his foreword to the report CPRE’s Chief Executive states: “this report makes a compelling case as to the economic, social and environmental benefits of restoring sections of rail lines that were axed in the 1960s, turning them from dead ends into through routes again.”

The CPRE press release is similarly bullish: “a new report from the Campaign to Protect Rural England (CPRE) has today found that the case for reopening rural railways in England is becoming irresistible.” [2]

Having long argued for a Plymouth-Exeter route that avoided the Dawlish sea wall, the local business lobby lapped this up. The head of the Local Enterprise Partnership was quoted as saying in relation to the idea of reopening: “Improved connectivity will increase productivity and growth by enabling economic sites across rural areas to be opened up for increased business.” [3]

Now to be fair to the authors of the report, they are a bit more cautious about what can be claimed. They point out that they are not making an investment case itself, but rather that the findings “offer a basis for developing an updated business case” (p8).

However, the authors state the focus of the report is the “local social and economic impacts” of a new line (p6). The evidence for these “impacts” are drawn from interviews, a literature review (primarily the West Devon Borough Council Local Plan and some business surveys), and a workshop at which “experts….validated the findings” (p6).

Having defined its focus, the report wanders off into unrelated territory. For example, it states that one of the factors to be considered in an investment appraisal is “Meeting the strategic needs of the naval dockyard in Plymouth” (p7). However much one may admire the Royal Navy, this objective is at some distance from CPRE’s own charitable goals.

There are vague and unsubstantiated statements. For example, the Dartmoor National Park Authority is held to appreciate “the obvious benefits that improved connectivity will bring to Dartmoor” without giving an inkling as to what these benefits are (p17)

The section on the local economy and its development (pp19-22) regurgitates a load of information from the Local Plan and the LEP’s Strategic Plan, but doesn’t link any of this to the rail investment case. There is one reference to a separate survey of businesses which found that 53% of the 300-plus businesses questioned reported that poor public transport links were seen as contributing to difficulties in recruiting staff. The CPRE report does not point out that this survey covered two other district council areas in addition to West Devon, nor does it record that only 20% of the businesses in West Devon identified public transport as inhibiting recruitment [4].

Many statements simply do not support the contention that there are economic and social benefits from reopening. Take four examples.

First, an investment appraisal factor is “The enlargement of the Exeter catchment both in terms of travel to work/education and more widely for day out/shopping” (p7). It’s not clear why encouraging people to spend in Exeter is an economic benefit to the rural areas, nor indeed why anyone is going to travel from Tavistock round the northern edge of Dartmoor to Exeter when Plymouth is bigger and nearer.

Second, the report notes that there are high levels of commuting from West Devon to Plymouth and Exeter, contrary to the Council’s policy aim of residents finding employment within West Devon. So it’s a bit surprising that anyone should be enthusiastic about making it even easier to commute out of West Devon (p16).

Third, presumably as evidence of the need for the rebuilt railway, the report cites a business based in Holsworthy complaining how difficult it is to find transport services to send employees away for training (p18). OK, but Holsworthy is 20 miles from Okehampton and 23 miles from Tavistock.

Fourth, health. The report notes that people needing acute hospital services travel to Plymouth if they’re in the Tavistock area and to Exeter if they’re in the Okehampton area. It also notes that the “main hospital sites are poorly located for future access by train” (p19) so no help there for the investment case.

Perhaps the biggest weakness of the report is that it fails to make any coherent case for joining up the gap between Okehampton and Tavistock. The attitudinal survey reports that Okehampton residents are interested in a train service to Exeter (where the track remains in place) but not to Plymouth (p26). There are complaints about the bus service, which could be resolved far more cheaply than rail reopening by local authority subsidy. Similarly, Tavistock residents favoured a rail link to Plymouth, but said nothing about getting to Exeter (p31).

The report is more convincing when it reviews the practicalities involved in rebuilding the line. Not least the challenge of what to do with the Victorian iron-built Meldon Viaduct, now a much loved cycle route and public footpath, and the need to demolish houses in Tavistock that have been constructed on the trackbed (pp37-39). Retaining the amenity of the 6-mile cycle route is also recognised as a challenge, though one suggestion is to reroute it well to the north, thus ruling out any realistic possibility of its use by cycling commuters between Okehampton and Tavistock, a policy that CPRE campaigns for nationally.

What on earth is the CPRE doing promoting all this? The organisation that has demonstrated how tranquillity in the English countryside is being lost now supports a scheme that would lead to noisy diesel trains (we don’t get new trains down here in the southwest) belching fumes into the atmosphere, shoving walkers and cyclists aside, and destroying peoples’ homes. See my related blog for pictures of the impacts. The scheme would also, on the report’s own admission, lead to increased car traffic to the new railhead stations which – particularly at Okehampton – would involve the development of park and ride facilities, necessarily on greenfield.

There may indeed be a case for rebuilding a railway between Tavistock and Okehampton. The CPRE’s report does not make it, and nor do the report’s authors claim that it does. But the spin given to the report, not least the unsubstantiated claim in the CEO’s foreword quoted above, means that a document with an ambivalent evidence base will continue to be held up as a “compelling case” for destroying a much-valued and accessible area of tranquillity in West Devon.