The Centre for Public Scrutiny has been tasked by the government with contributing to the new statutory guidance on overview and scrutiny in local government [1].  Below are my own suggestions, drawing on experience with monitoring Exeter City Council, which I have sent to the CfPS and the government.

1. There should be a requirement that scrutiny committees are constituted so as to be able to challenge ruling group proposals effectively. Exeter City Council changed its rules a few years ago to require that the chairs of scrutiny committees would be drawn from the majority party only (previously the chairs could be taken by members of opposition parties). This reduces the independence of the committees and, for obvious party political reasons, reduces criticism of leadership group proposals.

2. There should be more opportunities for members of the public to ask questions and challenge councillors at meetings. Other Devon councils allow questions to be asked at meetings of their executives/cabinets, but Exeter limits this practice to its scrutiny committees. Although the questioner is allowed to speak at the end of any discussion following the question and answer, no opportunity is provided to ask a supplementary question. This reduces the effectiveness of the challenge and the quality of discussion, and a requirement for one supplementary question would be valuable.

3. Scrutiny committees should be required to engage independent specialists to help them understand and challenge leadership proposals which have a high technical content, for example: on air quality, waste collection and disposal, estimation of housing need. This would enable officer-led proposals, often informed by consultancy studies predicated on terms of reference and assumptions issued by those officers, to be debated on a level playing field of knowledge.

4. Officers should be required to inform scrutiny committees of any representations received from organisations and individuals, whether solicited or not, relevant to an item being discussed by a scrutiny committee.

5. It should be mandatory for all proposals which would incur unbudgeted expenditure in excess of (say) £50k should be discussed at a scrutiny committee; and the proposal should state explicitly where the funding for the proposal will come from, including the impact on existing specific budgets.

6. In the interests of measuring the extent to which members of the public are having to resort to FOI Act/EIR channels to obtain information, the number, nature and outcome of all such requests such be reported publicly to each scrutiny committee cycle.

Some of these requirements will have – modest – costs at a time when local authorities are under severe financial constraints. In the interests of restoring the health of our democratic arrangements, the government should be prepared to make available additional funding to support them.

Not everyone is comfortable drinking the tap water in this small town near the southern end of Lake Maggiore.  So sales of bottled water abound.  That’s good for the producers and the retailers. It’s not so good for the people who have to pay for it. And, as Trump would say, it’s Very Bad (and then we’d part company) for the environment because of the need to produce and then dispose of the plastic bottles (think marine pollution and fish deaths for starters) not to mention the emerging if contested evidence that the chemical Bisphenol-A can leach from the plastic container into its contents and so into your body.

In Sesto Calende (and doubtless elsewhere) there’s an alternative that is both green and communal.  In the car park opposite the historic San Donato church stands a bottle-filling machine.  For 2 cents (in UK money that’s about 2p and rising, depending on Mrs May’s latest ramblings) you can fill your own one-litre glass bottle with still or sparkling water.  And you can do it as many times you like for 2 cents a time. Or buy a season ticket. 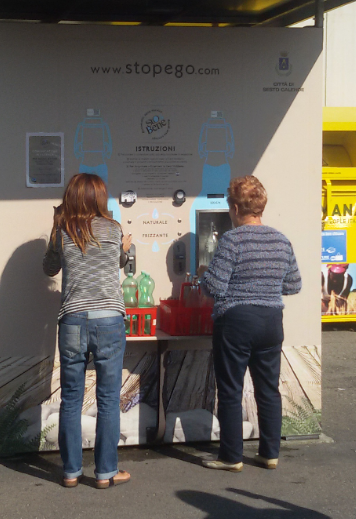 Compare this with the fact that you’ll pay 10 times the price for bottled water in a large supermarket and even more in smaller shops.

So, here we have a 24/7 public service which reduces health risks, cuts plastic pollution, saves users money and – even allowing for the fact that people drive to get there – is environmentally positive.  What’s not to like?